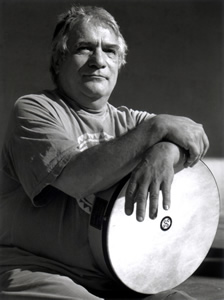 From his early days as a drummer in New Jersey, John Bergamo has never lost his desire to expand his interest in percussion. In 1959 John attended the Lenox School of Jazz in Lenox Mass. next door to Tanglewood, the summer home of the Boston Symphony. Under a scholarship, John studied drumset with Max Roach; had Percy Heath and Kenny Dorham as jazz band instructors; studied history and theory with Gunther Schuller, Marshall Stearns and George Russell; and was classmates with Ornette Coleman, and Don Cherry. In 1962 John earned an M.M. degree from Manhattan School of Music, followed by three summers in Tanglewood and time in New York City as a freelance musician.

Relocating on the West Coast, John became involved in learning Tabla and other hand drums traditional to non-European cultures, and since 1970, has been coordinator of the percussion program at California Institute of the Arts. This breadth of background has led John to such diverse musical involvements as concerts with John McLaughlin’s Shakti, performing in Frank Zappa’s Abnuceals Emukka Orchestra, recording with , and a tour to the Soviet Union with Robert Shaw, to name only a few. John continues to be involved in contemporary music performance, studio work, and non-EuroAmerican music performance.

Incorporating many of the styles which have influenced him, John has co-founded two all-percussion groups The Repercussion Unit in 1976 with Larry Stein, Ed Mann, James Hildebrandt, Greg Johnson, Paul Anceau, and Steven “Lucky” Mosko; and The Hands On’Semble with Andrew Grueschow, Randy Gloss and Austin Wrinkle in 1997.

Read about John in the Percussive Arts Society Hall Of Fame