“Randy Gloss’s maneuvering of his frame drum had to be seen to be believed…”
-Mina Silverstone, salamworldwide.com

“Randy Gloss’ work on pandeiro was one of the most amazing demonstrations of concentrated virtuosity I’ve ever seen.”
-Greg Burk, metaljazz.com

“Bergamo was successful at creating his own pool of students that went on to professional careers, most notably Randy Gloss who remains a highly innovative frame drummer.”
-Continuum Encyclopedia of Popular Music of the World, Volume II Performance and Production 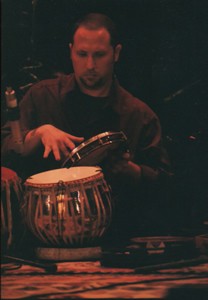 Based in Los Angeles since the mid-90’s, Randy Gloss has been on the faculty at California Institute of the Arts (CalArts) in Valencia California since 1999, where he oversees the World Percussion Program, and has also taught at UCLA and LA Music Academy (LAMA). Randy Gloss endorses Remo world percussion and drumheads, Paiste cymbals and gongs, Innovative Percussion drumsticks and mallets, and Cooperman frame drums.